Most of us catch a motorist’s eye before we cross the street, so what will we do when confronted with driverless cars? Until we pedestrians and cyclists learn from experience that autonomous vehicles pose less of a risk than their human-controlled predecessors, the answer could be the Smiling Car concept.

The Smiling Car uses an illuminated digital smile to let pedestrians know it has seen them and that it’s safe to cross the road.

The display shows a horizontal line while the car is in motion, which changes to a smile when the vehicle comes to a stop at a crossing. However, while pedestrians currently provide those of us on foot with a safe way of crossing roads, the advent of driverless cars is likely to spell their demise. Autonomous cars constantly scan the road and pavement ahead for pedestrians and other vulnerable road users. The technology will defer to vulnerable road users – a complete reversal in the status quo that sees 1.25 million people killed every year on the roads. These shocking casualty figures can only be improved by a fleet of vehicles that cannot speed, instigate road rage, drink drive, use mobile phones at the wheel or become tired.

Car design – more than simply how a car looks

The Mazda 6 pictured above might be smiling, but not with its eyes. If car design is a reflection of our own personalities, then we have become nation of bad tempered and aggressive drivers. The trend to make aggressive looking cars, which in the Mazda above manifests itself in the downward-shaped air intake below the bumper and the headlight design, does not serve any rational purpose. While sports cars have always been styled to have a sense of purpose, most cars on the road have no sporting credentials; they are designed to be as safe and economical as possible and they operate on the same speed-restricted, congested roads.

Consider how the appearance and character of cars has changed over the decades. Compare the Mazda MX-5 with the wide-eyed expression of the Frogeye Sprite. 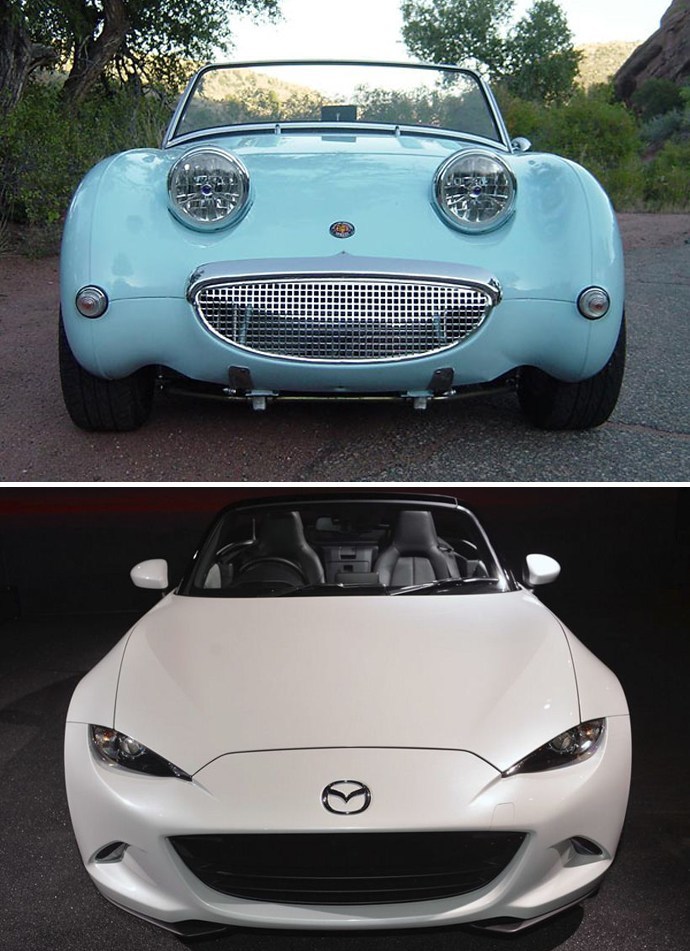 Driverless cars designed to be ‘assertive’

It may be that aggressive-looking cars are more than a reflection of our temperaments as drivers, but a catalyst for angrier roads. The Google driverless cars may have entirely discarded these unhelpful styling cues, but it is having to retain the driving habits they foster.

Google has admitted that if it wants its driverless cars to be able to survive alongside aggressive human drivers on the open road, they need to be more assertive. Engineers have tweaked the software that controls the cars to give them a slightly more aggressive edge. As a result, Google cars will creep forward at junctions to get through ahead of other drivers. Let’s hope that this assertive behaviour does not extend to jostling for space in car parks or refusing to yield to pedestrians crossing side roads.

It seems like cars need to be more aggressively styled than their predecessor in order to stand out from the crowd. It’s an arms race that does nothing to reduce road danger. Why not make cars look happy? Even a self-avowed petrol-head might admit that driving should be a somewhat happy, enjoyable experience. We’d all be better off if car design reflected that.

Established over 25 years ago, and with over 5,000 recovery trucks on call 24/7, we have a proven track record of providing efficient, reliable breakdown cover. We have been voted by the Good Shopping Guide to provide the most ethical insurance.

We handpick only the best local mechanics and garages around Britain to send out if you break down. We believe this way of working is efficient, environmentally friendly and helps supports local communities and economies, too.

On top of this, we offset the carbon emissions of the recovery trucks that go out to assist you, reducing the impact your breakdown has on our environment. Every breakdown policy you buy helps fund the work of our charity, the ETA Trust, which campaigns for a safer, cleaner transport future.