Electric cars are often dismissed as novelty vehicles, but for most drivers, a spin in the BMW i3 will be a revelation. The BMW i-range represents only 1 per cent of the company’s global sales at present, but the car maker predicts that EVs and hybrids will surpass internal combustion engine vehicle sales by 2040. If more drivers could get behind the wheel of the i3, it might happen considerably sooner. No other car makes widespread electric motoring feel nearer.

In its latest incarnation, the BMW i3  delivers 50 per cent more range, an improvement in performance which equates to a real-world range of 124 miles. An optional range (REX) version uses a 650 cc two-cylinder motorcycle engine as a generator to recharge the batteries, adding 80 miles to the range.

Two years ago, we had the chance to test the all-electric 1 Series ActiveE. It wasn’t a car you could buy, but it felt every inch a production-quality BMW. An electric conversion of a conventional 1 Series, the car was intended to help in the development of the BMW i3.

The four-seater BMW ActiveE was heavier than its petrol-powered its petrol-powered 1 Series cousin, but felt just as accomplished on the road. With a battery delivering the equivalent of 170 hp to the rear wheels, the car was no slouch and retained the poise for which the marque is famous. 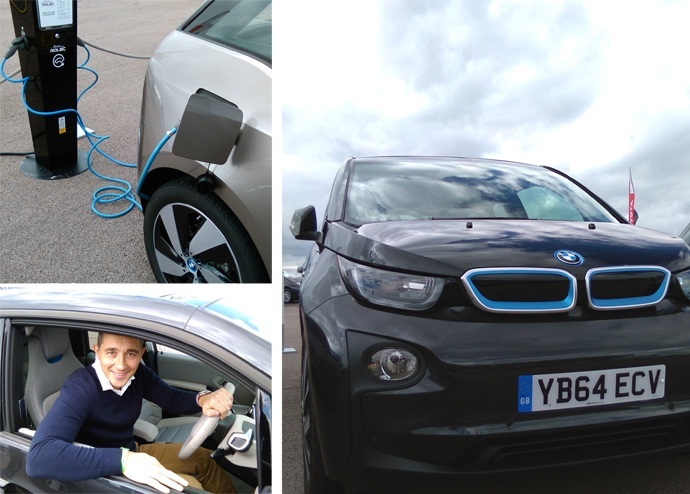 The BMW i3 is built as an electric car from the ground and a superior driving experience in every respect. It has brisk, seamless acceleration and a carbon fibre chassis, low centre of gravity and equal weight distribution delivers exquisite handling. The car accelerates briskly, but the effect of the regenerative braking is so powerful you rarely need to touch the conventional brakes if you drive carefully.

BMWs have a reputation as ‘drivers’ cars’, which makes the reception received by the i3 from motoring journalists telling; most have been impressed by its levels of refinement, handling and performance.

The BMW i3 has a range of 80 – 125 miles, but is available with an optional range-extending motorcycle engine that keeps the batteries topped up if they fall below 5 per cent charge, effectively doubling the range.

At around £29,000, the BMW i3 is too expensive to be the electric vehicle equivalent of the Ford Model T, but it is doing much to alter perceptions. It feels like the future is here today.

Established over 25 years ago, and with over 5,000 recovery trucks on call 24/7, we have a proven track record of providing efficient, reliable breakdown cover. We have been voted Britain’s most ethical insurance company by the Good Shopping Guide.

We handpick only the best local mechanics and garages around Britain to send out if you break down. We believe this way of working is efficient, environmentally friendly and helps supports local communities and economies, too.

On top of this, we offset the carbon emissions of the recovery trucks that go out to assist you, reducing the impact your breakdown has on our environment. Every breakdown policy you buy helps fund the work of our charity, the ETA Trust, which campaigns for a safer, cleaner transport future.