Headed up by Professor John Miles, an expert on transport systems at the University of Cambridge, a feasibility study estimates the cost of a 75kms network would cost up to £800m.

According to the Greater Cambridge Partnership, “Other smart cities are interested in working together with Cambridge to build and demonstrate a prototype AVRT shuttle vehicle”.

A recent report by lobby group Greener Journeys highlights the difference in social-economic profile between bus users and rail passengers, drivers and cyclists – with a higher percentage of those on lower income travelling by bus. If this relegation of the bus to the role of safety net is to be addressed, perhaps lessons need to be learned from the competition. Uber and other tech-driven ‘on-demand’ services are revolutionising every area of life they target. In the face of uberHOP, an app-driven shared taxi service with reduced fares, 12-ton, 5 mpg double decker buses that drive the streets whether or not they have passengers on board or not seem old fashioned. It may be that for buses to survive, the transport mode needs to embrace new technology rather than view it as a threat.

There is much talk of driverless technology, but the vehicles it delivers may have more in common with what we currently think of as a bus. 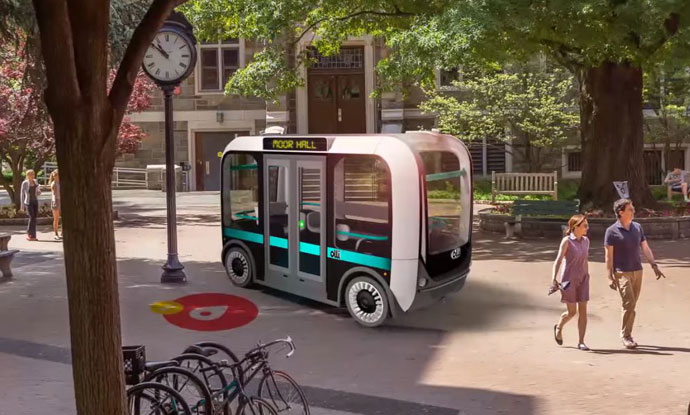 Olli is a driverless bus concept that seats twelve passengers and can operate as a chartered shuttle, taxi or network of interconnected ‘pods’. Crucially, Olli has no need to drive the roads endlessly to ply its trade. Strictly speaking, it has no need for bus stops either although these would be a necessary means of summoning a vehicle for those without a smart phone.

It’s an application of existing technology that offers the best of two worlds, blending the logic of public transport with the freedom of private car ownership.

Your Journey Our world

The ETA was established in 1990 as an ethical provider of green, reliable travel services. Twenty seven years on, we continue to offer cycle insurance, travel insurance and breakdown cover  while putting concern for the environment at the heart of all we do.