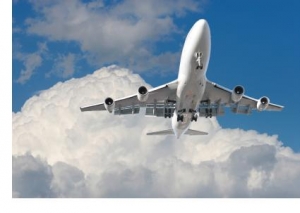 Just one return flight from London to New York produces a greater carbon footprint than a whole year’s personal allowance needed to keep the climate safe.

Our carbon footprint is the estimated amount of carbon dioxide (CO2) given out as we travel, buy food, heat our homes and enjoy our usual lifestyles.

The average personal footprint in Britain is 7.1t (2013). To get down to a fair share of the world’s total; this must be cut to 1.2t. On every flight to New York and back, each traveller emits about 1.2t of CO2. If we fly, air travel overshadows all our other impacts.

The Tyndall Centre for Climate Change Research says we need to cut emissions by 90% by 2050 – they believe this can be done, provided that a programme of work is started in the next four years. Others, including the ETA, believe the descent needs to be steeper, to achieve 90% in developed countries by 2030.

To keep the climate safe we need drastic cuts in air travel. Efficiency savings such as more direct flights shave off small fractions but are dwarfed by planned growth.

On every flight to New York and back, each traveller emits about 1.2t of CO2, using Department for Transport figures. This compares to an average British personal total of 7.1t (2013). To get down to a fair share of the world’s total, this must be cut to 1.2t. Air travel is really worse than this because it puts out more pollution than just CO2.  For example, water vapour at high levels forms thin clouds that have a warming effect. We can see trails visibly blanketing the earth. This and other effects mean that air travel has more than twice the warming effect of the carbon dioxide alone – the whole is referred to as radiative forcing. So each flight adds more to climate change than we should be emitting altogether.

The Intergovernmental Panel of Climate Change estimates that the warming effect of aircraft emissions is about 1.9 times that of carbon dioxide alone, due to the other gases produced by planes.

What is the ETA?

The ETA provides motorists and cyclists with green breakdown cover and green insurance products. The ETA exists in order to campaign for sustainable transport – when you buy our services you help fund our charitable work.